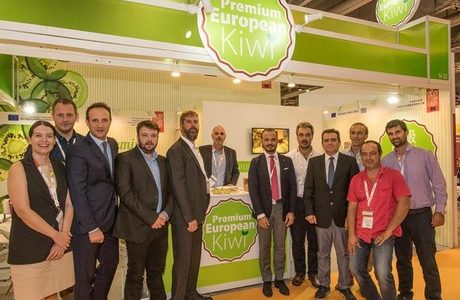 The campaign, Premium European Kiwi (PEW), targeted at the Canadian, UAE and Chinese markets, has concluded its first 16 months and is already harvesting the results of a successful implementation. The increased exports and positive feedback from the end recipients of its activities have resulted in PEW being invited by the CHAFEA and the European Commission to Brussels for presentation as best practice.
In the past year, the campaign has participated in SIAL Canada 2016 in Montreal, Asia Fruit Logistica 2016 in Hong Kong, WOP 2016 in Dubai and has also organized a series of successful promotional events, outdoor advertising and in-store promotions in Montreal, Hong Kong and Dubai.

The campaign is highly focused on providing an innovative approach to targeting important markets for European kiwifruits. Part of this approach includes the design and development of online tools for the promotion of the campaign goals, such as the mobile application PEW, available to download both for Android and iOS users.

The campaign is funded by the European Union and Greece for the promotion of kiwifruits in Canadian, Chinese and the United Arab Emirates’ markets. Behind this campaign are four Greek kiwi producing organizations: The Agricultural Cooperative of Chrisochori NESPAR; the Agricultural Association NESTOS, Alkyon SA, and Goustera SA.

Michail Xekarfotakis, President of the Agricultural Cooperative NESPAR, commented: “We are very happy to see that our hard work in cultivating world-class quality kiwi is appreciated in three major markets. Kiwis from European countries are a premium product, and Greece is among the top producers of kiwis worldwide. Campaign PEW helps us get the message across, and create better opportunities for all kiwi producers.”

Alexandros Arampatzis, managing director of WIN Ltd which acts as the campaign’s implementing body, commented: “The appeal of this campaign is the fact that we adapt its implementation depending on the market targeted each time. We employ a different approach for the Canadian, UAE and Chinese market, adapted to the needs and preferences of the local audience, and we find this to be highly successful. Our campaign has been among the 5 EU-funded campaigns which were invited by CHAFEA and the European Commission in Brussels on 31st January to be presented as a success story in the info day organized for the promotion of EU agricultural products. We are very proud of this accomplishment and expect to conclude the life cycle of this campaign with great success for this remarkable product, the European kiwifruit.”

The next activities include participation in SIAL Canada 2017 in Toronto, in store promotions and promotional events for opinion leaders and trade professionals of the Canadian market, as well as new social media accounts specifically for China.